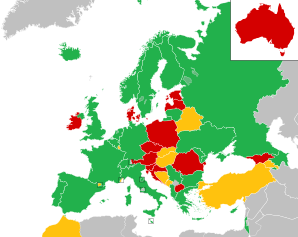 The Eurovision Song Contest 2021 is set to be the 65th edition of the Eurovision Song Contest. The contest will be held in Rotterdam, the Netherlands, following Duncan Laurence’s win at the 2019 contest in Tel Aviv, Israel with the song “Arcade”. The Netherlands was due to host the 2020 contest, before it was cancelled due to the COVID-19 pandemic. It will be the fifth time that the Netherlands hosts the contest, the last time having been the 1980 contest.

Organised by the European Broadcasting Union (EBU) and host broadcasters AVROTROS, Nederlandse Publieke Omroep (NPO) and Nederlandse Omroep Stichting (NOS), the contest will be held at Rotterdam Ahoy and will consist of two semi-finals on 18 and 20 May, and the final on 22 May 2021. The EBU discussed carryovers between the 2020 and 2021 contests, and several participating countries allocated the same artists who were due to represent them in 2020.

Forty-one countries will participate in the contest; the exact same line-up of countries that would have competed in 2020. Bulgaria and Ukraine will return after their absences from the 2019 contest, while Hungary and Montenegro confirmed their non-participation

Location. During the broadcast of Eurovision: Europe Shine a Light, which aired on 16 May 2020, it was announced that the 2021 contest will be held at Rotterdam Ahoy in Rotterdam, the Netherlands. The venue had previously hosted the Junior Eurovision Song Contest 2007.

Preparations. Prior to the announcement and following the cancellation of the Eurovision Song Contest 2020, the EBU began talks with the Dutch public broadcasters AVROTROS, NOS and NPO, as well as the city of Rotterdam, which were to organise the 2020 contest, on the possibility of staging the 2021 contest in the city. On 23 April 2020, the municipal council of Rotterdam approved an increased budget after Dutch media reported that the city would require an additional €6.7 million to host the contest. The decision was imminent as it was required that the EBU be informed by late April if Rotterdam was willing to host the contest. AVROTROS, NOS and NPO had until mid-May 2020 to find an alternative if Rotterdam declined to host the event.

On 7 May 2020, the Dutch authorities prohibited all mass gatherings in the country until a COVID-19 vaccine is produced.[7] The host broadcasters stated that they were assessing the decision and how it would impact the event. On 18 September 2020, the EBU released a summary of contingency scenarios for the contest, including the contest being held as normal with (scenario B) or without (scenario A) social distancing enforced, and allowing acts to perform from their home country if they are unable to travel to Rotterdam (scenario C). In the most severe scenario (D), should the Netherlands go in lockdown, the contest would be held in a fully-remote format, presented from Rotterdam but with no public festivities or audience (a format that will be trialed during the Junior Eurovision Song Contest 2020 in November 2020).

Production. The Eurovision Song Contest 2021 will be a co-production between three related Dutch television organisations — AVROTROS, Nederlandse Omroep Stichting (NOS), and Nederlandse Publieke Omroep (NPO) — of which each assumed a different role. Sietse Bakker and Astrid Dutrénit will serve as executive producers, while Emilie Sickinghe and Jessica Stam will serve as deputy executive producers.

Visual design. On 18 September 2020, along with possible scenarios, the EBU confirmed that the planned visual design and slogan for 2020, “Open Up”, will be used for the 2021 contest as well. The revamped official logo and branding was unveiled on 4 December 2020. Designed by CLEVER°FRANKE, it is “an abstract presentation inspired by the map of world and visually connects the location of the capitals of the 41 participating countries with Rotterdam as Europe’s beating heart”. The revamped visual identity, designed by MediaMonks and NEP, was built around patterns and ‘tracks’ that symbolises the Netherlands and “opening up”.

Postcards. The concept of the 2021 postcards was revealed on 1 December 2020. Based on the “Open Up” theme of the contest, but in a departure from the initial concept created for the 2020 contest’s postcards owing to travel restriction concerns, the postcards will now involve the artists being presented through footage shot in their country of origin, on the framework of a so-called ‘tiny house’ set up in various locations around the Netherlands. The postcard recordings will take place between March and April 2021.

Presenters. On 18 September 2020, along with possible scenarios, the EBU confirmed that the 2020 planned presenters will be appointed as the presenters for the 2021 contest as well: actress and television host Chantal Janzen, singer and commentator for the contest Jan Smit, and singer Edsilia Rombley, who represented the Netherlands in the 1998 and 2007 contests. Beauty vlogger Nikkie de Jager (NikkieTutorials) will be the presenter of the contest’s online content, including a behind-the-scenes YouTube series to be recorded with the participating artists.

Stage design (Organizzazione. Logo e slogan). During the announcement of the dates of the 2021 contest, Sietse Bakker, executive producer of the 2021 contest, stated that the planned 2020 stage design will also be used in the 2021 contest. The design is inspired by the slogan “Open Up” and the typical Dutch flat landscape. The Eurovision stage was designed by German stage designer Florian Wieder, who also designed the stages for the contests in 2011–12, 2015, and 2017–19. Unlike the 2019 contest, the green room was placed inside the main performance venue.

Entries (Brani in gara). Following the cancellation of the 2020 contest, the EBU explored the option of allowing the songs selected for the 2020 contest to compete in the 2021 contest, which needed to be discussed with the Eurovision Song Contest reference group and the national broadcasters. Victoria, the planned participant for Bulgaria in 2020, publicly expressed her support for such a move. However, on 20 March 2020, the reference group decided that, in accordance with the rules of the Eurovision Song Contest, the 2020 songs would not be eligible to compete in the 2021 contest.

Performances. On 18 November 2020, the EBU revealed that, as a measure to guarantee that all participants can take part in the contest, every national broadcaster will create a ‘live-on-tape’ recording prior to the contest which can be used if a participant cannot travel to Rotterdam, or subjected to quarantine on arrival. The recordings will take place in a studio setting, in real time (as it would be at the contest) without any edits to the vocals or any part of the performance itself after the recording. A set of production guidelines was also revealed to ensure fairness and the integrity of the recordings.

Semi-final allocation draw. On 17 November 2020, the EBU confirmed that the semi-final allocation draw for the 2021 contest won’t be held. Instead, the semi-finals will feature the same line-up of countries as determined by the draw for the cancelled 2020 contest’s semifinals, which was held on 28 January 2020 at Rotterdam’s City Hall and hosted by contest presenters Chantal Janzen, Jan Smit and Edsilia Rombley, and included the passing of the host city insignias from Zippi Brand Frank, Deputy Mayor of Tel Aviv (host city of the previous contest) to Ahmed Aboutaleb, Mayor of Rotterdam. The draw also determined which semifinal each of the six automatic qualifiers – the Big Five plus the Netherlands – would have to vote in.

Participating countries (Paesi Partecipanti).The EBU announced on 26 October 2020 that forty-one countries would participate in the contest, featuring the same line-up of countries that were set to participate in the cancelled 2020 edition. Bulgaria and Ukraine will mark their return to the contest after their absences from the 2019 contest, while Hungary and Montenegro were confirmed as non-returning following their latest appearances in 2019.

Semi-finalists / Finalists. The following countries have confirmed their intent to participate in the 2021 contest.

Final: The final would have taken place on 22 May 2021 at 21:00 (CEST). Twenty-six countries would have participated in the final, composed of the host country, the Big Five, and the ten best-ranked entries of each of the two semifinals. All forty-one countries participating in the contest would have voted in the final.

Active EBU members.Other countries (Altri Paesi). Eligibility for potential participation in the Eurovision Song Contest requires a national broadcaster with active EBU membership that would be able to broadcast the contest via the Eurovision network. The EBU issues invitations to all active members. Associate member Australia does not need an invitation for the 2021 contest, as it had previously been granted permission to participate at least until 2023.