List of countries in the Junior Eurovision Song Contest 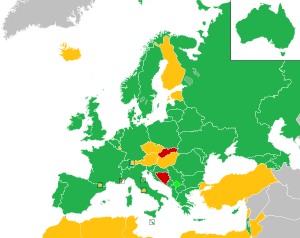 Participation since 2003: G – Entered at least once, Y – Never entered, although eligible to do so, R – Entry intended, but later withdrew, GC – Competed as a part of another country, but never as a sovereign state[c] 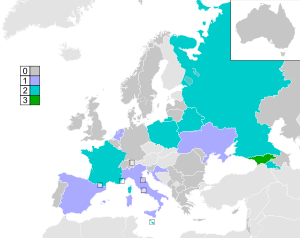 Forty countries have participated in the Junior Eurovision Song Contest since it started in 2003. Of these, ten have won the contest. The contest, organised by the European Broadcasting Union (EBU), is held annually between the members of the Union. Broadcasters from different countries submit songs to the event, and cast votes to determine the most popular in the competition.Participation in the contest is primarily open to all active member broadcasters of the EBU. To be an active member, broadcasters must be a member of the European Broadcasting Union, or be in a Council of Europe member country.[1] Eligibility to participate is not determined by geographic inclusion within the continent of Europe, despite the “Euro” in “Eurovision” — nor does it have a direct connection with the European Union. Several countries geographically outside the boundaries of Europe have competed: Cyprus, Armenia and Israel, in Western Asia, since 2003, 2007 and 2012 respectively; and Australia making a debut in the 2015 contest. In addition, several transcontinental countries with only part of their territory in Europe have competed: Russia, since 2005; Georgia, since 2007; Azerbaijan, since 2012; and Kazakhstan, which made its first appearance in the 2018 edition. Australia, where the contest has been broadcast since 2003, debuted as a participant in the 2015 edition.Both Belarus and the Netherlands entered the contest each year, whereas Switzerland have only entered on one occasion, in 2004. Three countries, Slovakia, Monaco and Bosnia and Herzegovina, have attempted to enter the contest but withdrew before making a debut.

Table key. Grey – Inactive – Countries who have participated in the past but did not participate in the most recent contest. Pink – Former – Former countries that have been dissolved.

Other EBU members. The following list of countries are eligible to participate in the contest, but have never done so.

Unsuccessful attempts to participate. There have been a few unsuccessful attempts to participate in the Junior Eurovision Song Contest. For broadcasters to participate, they must be a member of the EBU and register their intention to compete before the deadline specified in the rules of that year’s event. Each participating broadcaster pays a fee towards the organisation of the contest. Should a country withdraw from the contest after the deadline, they will still need to pay these fees, and may also incur a fine or temporary ban.

Monaco. Monaco and Monegasque broadcaster TMC expressed an interest in participating in the Junior Eurovision Song Contest 2005, however, plans did not come to fruition due to scheduling problems and harsh citizenship laws and thus they did not participate. They had stated an interest again to take part in Junior Eurovision Song Contest 2006, however at the end they did not take part in the contest.

Slovakia. On 21 November 2002, Slovakia was drawn as one of the countries to participate in the Junior Eurovision Song Contest 2003, to be represented by Slovenská televízia (STV). However, Slovakia later announced that they would withdraw from the contest. On 7 June 2019, according to Eurovision blog Eurofestivales, press spokesperson Erika Rusnáková for Slovak broadcaster Radio and Television of Slovakia (RTVS) stated that they were evaluating and supervising the possibility of debuting at the 2019 contest. However, on 10 June 2019, RTVS confirmed that they would not debut in the 2019 contest.