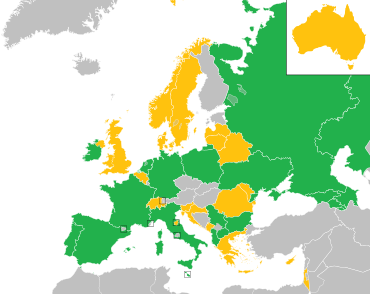 : Countries that participated in the past but not in 2021.

Countries that did not qualify for the final

The Junior Eurovision Song Contest 2021 was the 19th edition of the annual Junior Eurovision Song Contest, organised by France Télévisions and the European Broadcasting Union (EBU). The contest was held on 19 December 2021 at La Seine Musicale in Paris, France, following the country’s victory at the 2020 contest with the song “J’imagine”, performed by Valentina. This was the first time the contest was held in France, as well as the first Eurovision event to be held in the country since Eurovision Young Dancers 1999 in Lyon and the first to be held in Paris since Eurovision Young Dancers 1989.

Nineteen countries participated in the contest, with Albania, Armenia, Ireland, Italy, North Macedonia and Portugal all returning after their absences from the previous edition. Azerbaijan and Bulgaria returned after two and four-year absences respectively. For the first time in 19 editions, Belarus did not participate, as the country’s broadcaster is under a three-year suspension from the EBU, making the Netherlands the only country to participate every year since the contest began in 2003.

Armenia’s Maléna was the winner of the contest with the song “Qami Qami“. This was Armenia’s second victory in the contest, following their win in 2010. Poland, host country France, Georgia and Azerbaijan completed the top five, with this being the highest placement for Azerbaijan to date. Portugal also achieved their highest placement, finishing 11th. Meanwhile, the Netherlands finished in last place for the first time in the contest’s history. Ireland and Spain also achieved their lowest placings to date, the latter finishing outside the top five for the first time.

1.Location. On 9 December 2020, it was announced that the contest was set to take place in France in 2021. It was hosted in Paris at La Seine Musicale, a 6,000-seat concert hall located on Île Seguin. The contest was held on 19 December, which is the latest date for the contest ever. The last time it was held in December was in 2012.

1.1.Bidding phase and host city selection. Unlike Eurovision’s adult version, the winning country originally did not receive the automatic rights to host the next contest. However, for the contests since 2011 (with the exceptions of 2012 and 2018), the winning country has had first refusal on hosting the next competition. Italy used this clause in 2015 to decline to host the contest after their victory in 2014. On 15 October 2017, the EBU announced a return to the original system in 2018, to help provide broadcasters with a greater amount of time to prepare, and to ensure the continuation of the contest into the future.

On 9 December 2020, it was confirmed by the EBU that France, having won the 2020 contest, would host the 2021 contest. The French Head of Delegation Alexandra Redde-Amiel had previously stated that France Télévisions was keen to host the contest. Spanish broadcaster Televisión Española (TVE) had also expressed an interest in hosting the contest if they had won the 2020 contest.

On 20 May 2021, during a press conference held by France Télévisions and the EBU, it was confirmed that the contest would be held in Paris. It was the second consecutive time the contest is held in a capital city.

The event is held with no restrictions, as it was before the COVID-19 pandemic began (scenario A).

The event is held with social distancing measures in place (scenario B). The Eurovision Song Contest 2021 was held in this scenario.

3.1.Opening and interval acts. French DJ duo Ofenbach were the opening act for the show. During the interval, Valentina performed a Christmas version of her winning song “J’imagine“. All participants then joined on stage for a rendition of the common song, “Imagine”. Barbara Pravi closed the interval with a performance of her song “Voilà“, with which she represented France in the Eurovision Song Contest 2021.

3.2.Presenters. Carla, Élodie Gossuin and Olivier Minne were the presenters of the show. Carla was also the French entrant in the Junior Eurovision Song Contest 2019. The hosts were revealed during a press conference on 17 November.

The stage of the Junior Eurovision Song Contest 2021

3.3.Visual design. The slogan for the contest, Imagine, was revealed on 20 May 2021 during a press conference prior to the Eurovision Song Contest 2021 in Rotterdam, Netherlands. The slogan was chosen as a reference to the previous year’s winning song “J’imagine”, as well as a way to encourage children to be creative and pursue their dreams.

The official logo and theme artwork for the contest was unveiled on 24 August 2021. The artwork was inspired by three themes: imagination, Christmas and the Eiffel Tower.

3.4.Postcards. Contestants were featured in “postcard” video introductions, set in a different location in Paris, or surrounding areas in France. Each began with a short clip of the upcoming performer flying over the skies of Paris via green screen, followed by an extended sequence involving dance troupes dancing in a specific Parisian location. Following that, a stream of light in the colours of the upcoming country’s flag entered La Seine Musicale, and the upcoming participant’s face was projected onto the exterior of the venue, signalling the beginning of the upcoming performance.

The Russian representative, Tanya Mezhentseva, has participated in the Junior Eurovision Song Contest before; she represented Russia in 2019 along with Denberel Oorzhak, finishing in 13th place with the song “A Time for Us”. This is only the third case (all of whom have been from Russia) in the competition to feature a returning artist from previous editions after Katya Ryabova (Russia 2009 and 2011) and Lerika (Moldova 2011 and Russia 2012). The Armenian representative, Maléna, was set to participate in 2020 with the song “Why” before Armenia withdrew from the competition.

4.1.All the national selections for Junior Eurovision Song Contest 2021:

5.0.12 Points. Below is a summary of all 12 points received from each country’s professional juries.

5.1.Spokespersons. The 12 points from the juries were announced live by a spokesperson from each country. Countries that did not provide their own spokesperson had their 12 points announced by a local student from Paris.

5.2.Online voting. According to the EBU, a total of over 4.3 million valid votes were received during the voting windows.

6.Other countries. For a country to be eligible for potential participation in the Junior Eurovision Song Contest, it needs to be an active member of the EBU.

Some countries rebroadcast the event several days later in late 2021 or early 2022 like Albania and Portugal during Christmas.

7.1.Viewing figures. According to the EBU, 33 million people watched the Junior Eurovision Song Contest 2021, with a viewing share of 15.6%. France had record high viewing figures for the contest, while the Netherlands had record low viewing figures. For the following countries, viewership information is known:

8.Official album. Junior Eurovision Song Contest Paris 2021 is a digital compilation album put together by the European Broadcasting Union, and was released by Universal Music Group on 3 December 2021. The album features all the songs from the 2021 contest.